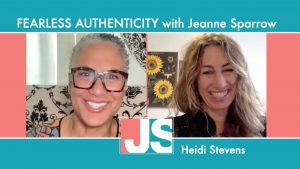 Heidi Stevens has what I call Fierce Authenticity! She is a truth teller in the best way, always shining a light on people doing good in our communities, especially if it involves parents and children. But I really think part of her appeal is that she is not afraid to reveal her own imperfections as a parent and a human.

JS: I remember you talking about how when you started your column, it was kind of the first time you had started sharing personal things, but how you thought your stories might help other people feel less alone. Was that the moment that you decided that what you were doing with your life was right or had you already decided it and then that kind of changed along the way? I want to talk about that progression of knowing that, even if you don’t get it right all the time, yeah, that you’re on the right path.

HS: That’s such a generous way to put it. And to be totally honest, I never know for sure if I’m doing it right, any of it, career, marriage, parenting, friendships. I think I’m pretty good at my friendships. But, I certainly make mistakes. We all do. And I think what the column helped me realize was that I could do it wrong, I would still be worthy of love and second chances. And third and fourth chances if I needed them. And that I had a unique platform to help other people understand that as well. Right, like I could publicly stumble, I could publicly admit to my stumbles, I could publicly be just human, and not a character who tries to be flawless or palatable to everyone or name the thing that keeps us in a box or keeps us silent. And so I hope that’s what the column did. And that’s the way that it would help people feel less alone. Because I did think, pretty early on, that one of the worst feelings I had, and this was what helped me, I think, leave my first marriage was that feeling of loneliness. I mean, you can be really, really lonely, surrounded by people, right, you could be really, really lonely at work, you can be really, really lonely parenting, even though there’s children, like literally hanging on you. You could be lonely in a marriage; you could be lonely in a relationship. And I thought, I hate that feeling. If I have any power in this job, it’s going to be to help somebody, one person, a dozen people, whatever, feel less lonely. And so I tried to seek out stories that would help people feel less lonely by saying here’s someone else who maybe is a bereaved mom, and what that looks and feels like to her. Here’s somebody who stepped up and helped a neighbor, maybe that’s something you’d want to model, or stories that kind of connected us again. I keep using the word connection, but then woven in there, I would write columns about my own life too, because I think that my story could help people feel a little less alone too: divorce, remarriage and parenting and step parenting and all the things.