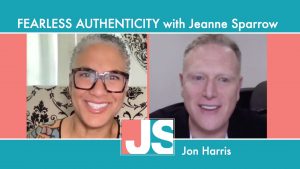 I don’t think I’ve ever met someone more truer to their self than Jon Harris. To me, he is the definition of Be Brave, Be Free, Be You. He’s not afraid to be real, to show up as himself every time, and share his passions. As the Senior Vice President and Chief Communications Officer of Conagra Brands, Jon meets a lot of people and one of his gifts is bringing them together – it’s like magic.

JS: John, I know a lot of connectors, but you that’s like a superpower, like super connector! Man, I need to get you a cape.

JH: I learned early on in my life, that the time to make friends is not when you need them, but always. I remember in high school, I had a job at Dial America telemarketing years ago, you know, there was telemarketing. Which is by the way, where I learned great rejection, I learned great rejection in my dating life. And Dial America telemarketing selling Weekly Reader and anything else I could possibly sell online. But I used to help folks get part-time jobs and that’s when I learned I really loved helping people, helping connect people. And so I did that. And then throughout college, I had jobs at the Student Union. I was on student aid. And I helped connect folks with jobs within Rutgers.

JH: Total work study. Do you know that the I was so close with the woman in the financial aid office? May she rest in peace Lesley Gilbert, she came to our wedding.

JH: I learned the value of real friends, real true friendship, real people being themselves and authentic. And what a blessing it was to have people in your life. And that’s why I always wanted to give back. And even though my home life might have been a little unique, I wanted to help folks because I realized that everybody had that. So I was connecting folks. I got a job at Lens Crafters. I worked at WXRK in New York. I worked for Howard Stern.

JS: You worked for Stern? In all our conversations, how did I miss your radio time with Stern?

JH: I’ll tell you a funny story. The other thing in life is moxie, right? So what you’re talking about being brave, be free, be you. I won tickets in 1990 to go see Billy Joel at Nassau Coliseum. My dad (had) died and I was raising my brothers. I didn’t have an internship. I was a communications major at Rutgers. And I’m like, “Oh my gosh, I gotta get an internship.” So it was over the summer. And I had to go to WXRK to pick up the tickets. And I walked in I said, Oh, I’m also to a woman by the name of Diane Areyardy. If she’s listening, Diane, hello, and I love you and I owe you a lot. And I said to Diane, “Hey, Diane, I’m also here to talk to someone about an internship for next semester.” She said, “Oh, you mean Jeff Zaidman?” And I’m like, “Yes.” And she’s like, “Alright, come tomorrow.” So the next day I came in my Marshall’s suit that my mother bought me that was completely oversized. And I got the internship.