How He Forgave Himself For Not Giving “SNL” His All with Actor, Author, Stand-Up Comedian, and President of the Laugh Factory Finesse Mitchell. 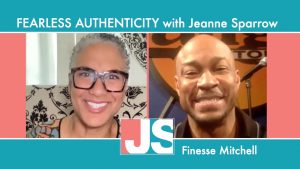 Finesse Mitchell was one of THE best guests we ever had on You & Me. He would come on the show to promote his stand-up gigs and had the whole studio rolling with his take on current events and advice on relationships. I thought I knew all about my brother but he totally surprised me with his new role as President of Laugh Factory, the comedy club chain where he got his start. He says it’s a dream come true!

JS: I didn’t even know you wanted to be an executive and kind of running stuff. How did this happen? And where are you taking it?

FM: When I was younger, I always wanted to own my comedy club. And I got really close, I had an investor and everything. I was doing stand-up at the time. In fact, I believe I was fresh off of Saturday Night Live. So I wanted to own my own Comedy Club, got my investor, everything fell through. I moved back out to L.A. after New York, after a stint in South Florida and then moved back out to L.A. ended up getting a Disney Channel job and became China’s dad on the show called Ant Farm and that ran for four years. It escaped me; I got back into acting and the problem has always been with me is jack of all trades syndrome, you know what I mean? I always felt like I can do anything I can. Comedy was the escape from me trying to do everything and comedy ended up taking off and turned into Saturday Night Live and everything else. So it was like how do I become the business exec and real estate mogul and the strip club owner? I got goals, you know what I mean?

JS: But you know what, though, Finesse? I think you and I have talked about this a little bit. But I want to dive deeper into that. Because that happens to me too. Whenever you’re one of those people who acts and cuz it’s like for me it’s radio, TV, voiceover now podcasting and speaking and stuff like that. People are like, “Could you pick something?” No! Why would I? Why would I ever want to pick any one thing? My brain just doesn’t work like that. And I think so many times people tell you what you should be doing. And if you get known for one thing that people like, why you branching off to this other stuff? Like, that’s where I started. I’m just getting back to it. How do you manage that when other people have expectations of what you should be doing? And balancing that with what your heart says, and what you know you’re good at, because you are good at a lot of different things.