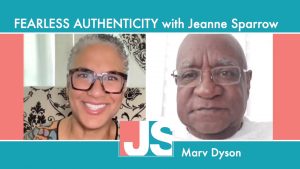 Urban Radio legend Marv Dyson was one of the first super successful Black people that I ever met. He was the general manager of WGCI in Chicago when I was just starting out and turned the station into a powerhouse, hiring three of the biggest names in syndicated radio: Tom Joyner, Doug Banks, and Steve Harvey. But through all that what I admired most was that he kept it real, and I could connect with him and believe that kind of success was attainable for me too.

JS: When you think about it, three of the giants of the syndicated radio game are all three people you created. Yeah. So the thing is, is that you almost didn’t make most of those decisions. Right. So then the question becomes, what do you think your biggest failure has been? Or the biggest setback you’ve ever had, biggest challenge you’ve ever had? How did you overcome it? Is that the thing that inspired you to get through any other challenges that you’ve had since then?

MD: I think probably the biggest failure that I can remember that I corrected. Hmm. was probably very honestly, hiring Steve Harvey. He told me once he said, I’m probably the worst hire you ever had. And I said you were I said, but you also one of the most talented, and it really worked out because everybody was saying you can’t have a comedian on the radio. But a long time ago, my dad told me, “If you’re going to go to hell in a handbasket, you make damn sure you design it.” So when people were telling me all the things I couldn’t do, including Robert Feder, and some others. Robert said, “You can’t have Tom Joyner flying back and forth.” And he ended up doing it eight years. And then Robert Feder and the Sun-Times finally apologized and said, “Yeah, you were right.” But those kinds of things, every time I made a decision, I think, “Okay, I will get advice from everybody. But ultimately, I’m going to make the decision. So if this doesn’t work, I can’t blame anyone but myself, because I’d hate to be going to hell in a handbasket in somebody else’s basket.”

So I just decided to make all my decisions based on I’m going to do my own basket and whatever if it fails, great. If it succeeds, great. Well, I’ll be at 84 years old in a few days, and all of the decisions I’ve made, they turned out really, really great. Who would have ever thought a short black man in Chicago would run the number one radio, Urban Radio station in America for over 20 years, and have as much fun as I had, and meet as many wonderful people as I have met in that time span. The best part though, is when I look back, I think there are so many people in this country that would love to do what I did. The best part of my life has been the 20 Oh, probably 40 plus years I spent doing radio. And I know you didn’t ask that question. But I’m just blessed to have had this this lifestyle.

JS: But you know what Marv, that’s really what it’s about. That is what this whole podcast is about. It’s like what makes a good life for you know, we all have different definitions of what it is. And I think that a lot of times we are told what it should be, instead of doing our own things. So I think there’s a lot of value in talking to somebody who’s been working their whole life. And doing it well and doing it at the level that you do it.